Boss Murphy and the Renewal of Churchtown Village

A personal note from Gerry Murphy:

In 1997/98  – as part of the renewal of Churchtown – I was thinking of opening a hospitality business in Churchtown. I was considering branding and investigated many options before settling on the name Boss Murphy – after my great grandfather William ‘Boss” Murphy (1831-1911) and my grandfather John Francis ‘Boss’ Murphy (1875-1955). I also borrowed the ‘Boss’ name from my father-in-law, Jim Cunningham (1905-1995), who was also known as Boss Cunningham. The nickname ‘Boss’ in Ireland was generally used as a term of respect for an employer. That’s how the Boss Murphy brand began in 1999.

The decline and renewal of Churchtown

From the 1970s to the 1990s, I watched the decline of my home village of Churchtown, albeit from a distance as I was living in Dublin. In 1992 I saw the closure of Jerry O’Sullivan’s pub, previously Flannery’s Bar, and more and more dereliction of village properties. I never lost faith in Churchtown and believed with all its fine cut-stone Georgian buildings, that the village was a treasure waiting to be renewed. Over the years I made a few unsuccessful attempts to purchase a small ‘holiday home’ property in the village.

I was reading a Sunday Tribune article in February 1997 – which was based on an article that appeared some days earlier on a front page report in the Evening Echo – about O’Sullivan’s (or Flannery’s, as we called the pub in my youth) moving to Vienna and decided I had to use my skills and try to ‘do something’. I telephoned local auctioneer, Michael Broderick, and asked him to see if the owners of the derelict Market House in Churchtown (which was also part of the overall village pub property) would be prepared to sell it. After some negotiations about the price, I agreed to purchase much more than the Market House. I bought the unlicensed pub, dwelling house, outhouses, stables and the Market House itself from Liam and Marie O’Herlihy, who had bought the premises from Jerry O’Sullivan, the previous owner, on 24 December 1992. At that stage I did not have a clear plan apart from using these buildings as the base for renewing the village.

The deal closed in August 1997, just as I was resigning from First National Building Society to pursue my plan to develop a portfolio of interests. Early on it became clear to me that I needed to separate what would be seen as ‘commercial’ in my developments in Churchtown with what would be voluntary and philanthropic, and so I also founded the Churchtown Village Renewal Trust on 5 June 1997.

Evening Echo from Saturday 11 January 1997. The first of two press articles on the selling of the internal furnishings of Flannery’s Bar in the village which inspired the foundation of the Churchtown Village Renewal Trust and the establishment of Boss Murphy’s.

Working with my accountant, Peter Stewart of O’Donovan & Co, I set about devising a tax-efficient plan for the premises, which I hoped could be tourist-related and offer accommodation so as to open up Churchtown to visitors. With help from Alexis FitzGerald, a plan was prepared to open a ‘holiday hostel’ in Churchtown and this was presented to Bord Fáilte for BES approval and possible grant support under the EU’s ERDF grant scheme. Ciaran O’Brien of Gerry Cahill Architects surveyed the premises and, overseen by Gerry Cahill, whom I had met when I was chairman of the EU Thermie project, a planning application was submitted to Cork County Council on 28 July 1997.

Planning permission was obtained and BES approval secured from Bord Fáilte for €627,000 on 23 December 1997.

I invited a group of key decision-makers from Ballyhoura Development Ltd, Cork County Council, Bord Fáilte and Cork North Enterprise to discuss plans for Churchtown, under both the Boss Murphy commercial heading and under the umbrella of the Churchtown Village Renewal Trust. Carmel Fox of Ballyhoura Development and Greg Collins of Cork County Council attended this important meeting, as did Rochie Holohan from Cork North Enterprise, which subsequently supported the development of the ‘dotcom’ company George’s Street Technology Ltd in the village.

Carmel Fox and Ballyhoura Development went on to become major supporters of the renewal of Churchtown.

A public meeting to discuss the plans was held in the Community Hall in Churchtown in July 1997. This was a follow on to a two-day self- development course, organised by the Churchtown Village Renewal Trust. A meeting was also held in O’Donovan Stewart’s offices in Dublin of a group of advisors, including Pat Cusack of Cusack McTiernan, Solicitors, and Martin Keaney of Keaney Design, to outline and discuss the master plan. A presentation of the overall plan to Cork County Council eventually resulted in a grant of €19,000 to the Churchtown Village Renewal Trust.

With Eileen Ahern-O’Connor acting as an intermediary, Boss Murphy’s acquired two more adjoining properties in Churchtown from Jack and Gail Mortimer. This part of the Boss Murphy premises had special significance because these properties were operated as a pub by my grandmother and grandfather, John Boss Murphy and his wife Margaret. A revised planning application was submitted and approval was obtained for the enlarged scheme.

Funding for the BES was drawn down on 25 September 1998. An ERDF grant of €190,000 was also approved on 3 December 1998. BDO Simpson Xavier – lead by Stephen McGivern – supported the BES and with substantial further capital from myself, building work began.

A special meeting was organised on 26 January 1999, entitled ‘Facing the Millennium with Confidence’. It was attended by a wide range of decision-makers, including Maurice Moloney, County Manager, and Theresa White, Assistant County Manager. The Churchtown Declaration was presented to this meeting.

One of the most important events was the appointment of Maurice Gilbert as builder at Boss Murphy’s in 1998. Maurice was recommended by Oliver Byrne as he had completed the building of the Padre Pio Nursing Home. Maurice was responsible for the refurbishment of Boss Murphy’s, which included the Market House, and his contribution to the renewal of Churchtown was very significant. So, after some initial work in late 1998, construction began in earnest in early 1999.

In a disappointing outcome, in 1998 I decided to open a Boss Murphy’s pub in Dortmund in Germany. Trading was unsatisfactory and the pub was both opened and closed in 1999.

Former schoolmate of mine, Francie Conway, helped to make Boss Murphy’s first major piece of original merchandising – the CD Boss Murphy’s Spirit of Cork , with 11 tracks including Finbar Furey’s ‘Song for Churchtown’, was produced by Francie and released in 1998.

The first dinner at Boss Murphy’s took place in what was then known as the Imogane Room on 2 September 1999 and it was attended by doctors Tony and David Walsh of the Sims Clinic in Dublin, where I was a founding investor / director.

Tom Martin, an MBA colleague of mine and a supporter of Churchtown (its first webmaster), introduced substantial corporate business to Boss Murphy’s when he was responsible for hiring the entire premises for nine full weeks in 1999 as a training centre for Eontec. During this time Boss Murphy’s had visitors from all over the world.

Planning permission for 72 new houses was received in March 2001 and Ballyhoura Construction Ltd – the new company incorporated by Maurice Gilbert – began work on this development, which was named ‘Bruhenny’ in May 2000.

In July 2000 President Mary McAleese visited Churchtown to open the new Community Centre. Deirdre and Niamh Murphy opened Boss Murphy’s on the same day. In the summer of 2000, legislation was passed that would allow Boss Murphy’s to purchase a licence and open a pub on the premises. It became clear that Boss Murphy’s required a ‘dedicated’ couple who would manage it and prepare for the pub opening.

In August 2000 Mary Kelly and her husband John visited Churchtown, having been recommended as potential ‘landlords’ for Boss Murphy’s. Mary Kelly arrived in September and had an immediate impact on the business, with her dedication to service and hospitality. John joined the full-time staff in June 2002 when the new pub, ‘The Village Inn’, opened. Jason Bernier finally succumbed to the weather and headed back to California and Gwen Burkard left for a job in Tralee, both having left their mark on Boss Murphy’s. Gwen even appeared on RTÉ’s Nationwide programme, talking about Boss Murphy’s. Housekeeping staff included Mary Jones and Linda Chamberlain. Waiting staff, led by Helen Ahern, included Brenda O’Sullivan, Clare Denise, Heather O’Brien and Stephanie Flavin. Kitchen staff included Joan O’Donovan and Joanne Quinn. 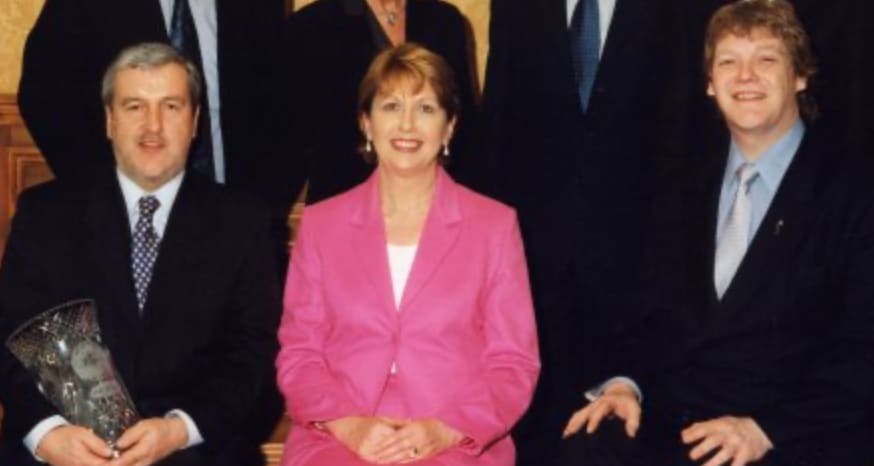 I was honoured to receive the Cork Person of the Month Award in August 2001 as recognition for my work in developing the social, economic, educational and environmental infrastructure of Churchtown. “It is the way to go for rural Ireland and Europe”, said Brian Crowley MEP., who presented me with  the Monthly award.  I went on to be awarded  Cork Person of the Year, at a function in Jury’s Hotel Cork on January 25th 2002. President Mary McAleese presented the award.

Having managed Boss Murphy’s through the initial stages, Michael Barry decided to spend more time in developing his own plans and moved to Majorca, off the Spanish mainland. It was decided to rebrand the restaurant as ‘The Windmill Restaurant’ and the woodwork of the premises was painted blue as a contrast to all the grey stone.

Huge consideration went into deciding where exactly to locate the pub premises in Boss Murphy’s. It was agreed that the original pub premises was too small, so the ‘Eontec’ training room and the Imogane Room were converted into what was christened ‘The Village Inn’ and some private parties took place there in December 2001. Maurice Gilbert, with support from Terry Brennan of Chatham Design, built the pub. In December, Gerry Corbett retired from my office in Dublin and was awarded the Churchtown Village Renewal Trust Medal of Honour for his valuable service to the parish.

conversion of Boss Murphy’s to a full hotel in early 2002. A court date was set for a pub licence hearing in June 2002 and the licence was granted. On Friday, 7 June, the pub opened its door and the first pint was purchased by Toby Manning. By July 2002, over 20 new homes had been sold at the Bruhenny site and 15 new families had moved into Churchtown. Work had begun on a further 18 houses in Phase 3.

Having purchased the BES shares from the tax-based investors on 4 March 2004 I decided running a pub was not a good idea for an absent landlord and so I sold my 100% shareholding in Boss Murphy’s Ltd to Richard Fitzgerald and Donal O’Sullivan who owned a chain of pubs.

Boss Murphy – The Horse! A clipping from the Vale Star on 28 March 2002 reporting the victory of Denis Fehan’s horse ‘Boss Murphy’ in the Liscarroll Cup in March 2002. The horse’s name was inspired by Jim Quinn and also won at Mallow.
Boss Murphy’s promotional leaflet 2002.
Boss Murphy’s which opened in Dortmund in 1999. The venture was not a success.
Boss Murphy’s accommodation opened in 1999. The business was officially launched in 2000 to coincide with President Mary McAleese’s visit to Churchtown on 14 July 2000. Boss Murphy’s Pub was opened on 29 June 2002 by Willie Joe Condon and Kitty Fitzgerald, two of Churchtown’s esteemed senior citizens. The pub is called after William Boss Murphy (1831-1911) and dedicated to the memory of Bill Murphy (1916-84), eldest son of John Boss Murphy (1875-1955).
A bronze bust of William Boss Murphy (1831-1911). Sculpture: Elizabeth O’Kane. www.elizabethokane.com.
Back to Top

Any cookies that may not be particularly necessary for the website to function and is used specifically to collect user personal data via analytics, ads, other embedded contents are termed as non-necessary cookies. It is mandatory to procure user consent prior to running these cookies on your website.